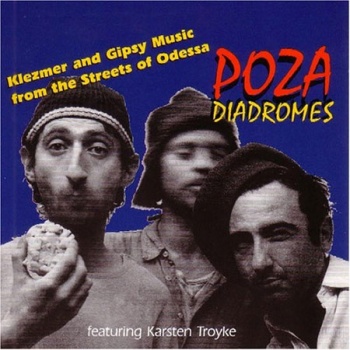 Original Klezmer and Gipsy Music from the Streets of Odessa

POZA presents street songs of Eastern Europe. This tradition goes back a long way and is one of the most common performed artforms of nomadic people of the East. The view on life with the eyes of the migrant is early expressed in songs about love, sex, gambling, drugs and other addictions.

The source of POZAs inspiration is the music being played by Gipsies and Jews in such popular dance styles as klezmer, hasapiko and ziganochka. However, the atmosphere created is the one of joy and vitality – whether a song or instrumental – it is always dance music.

The group's image is especially imprinted by Raymond van Houten – the Dutch „Greek” – playing the „klarino” and Odessit Alec Kopyt the accordion-player, who sings with his raw voice drawn from life. These recordings are the result of weeks of touring Europe accompanied by the hipster Leonid Soybelman playing the guitar and tuba. Spontanously invited to join the recordings at the end of the tour in Berlin, Karsten Troyke enriched two of the songs (4, 10) with his unmistakable voice.