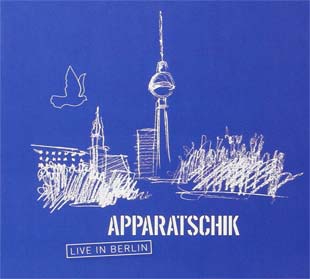 30 years of APPARATSCHIK – the new CD for the anniversary

Apparatschik combines the characteristic Eastern melodies of the former Soviet Union with western beats. With its culture-clash style, it hit the nerve of the transit hub Berlin. The band created a new genre – long before the term „World-music” became known and the Russiandisco wave hit. Apparatschik quickly became a cult band and toured throughout Europe.

Using traditional instruments, such as the balalaika, accordeon, bass balalaika, drums and with profound vocals, Apparatschik whirls over (and with) concert-goers like a storm straight out of the Siberian steppe bringing polka, reggae, Ska, electro swing and dance groove rhythms.

In the new album „Kurs Ost-West”, songs like „Balalaika Techno Trance” amaze insiders because Apparastschik doesn't need special machines for creating the sound effects – it is all real and played by hand. The song „Rjabina” starts as a tranquil atmospheric song that turns into a downhome reggae that invites dancing with strong beats. „Am Samowar” is from the start a relaxed electro swing that channels the typical sounds of the 1930s. „Tschavo” is an indulgence – a chilled slow Gypsy song.